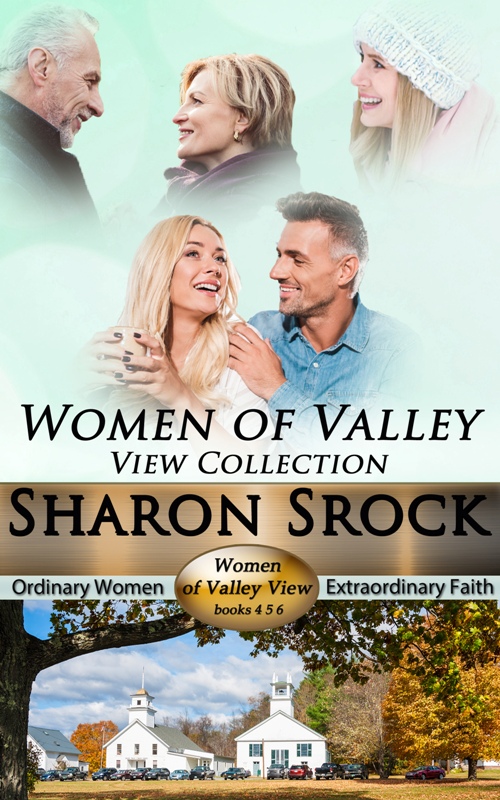 Part of the Women of Valley View series:

This anthology includes Books 4 - 6 in the Women of Valley View series.

SAMANTHA
Four years after a con man let Samantha Evans broke and pregnant, now surrounded by a loving family, her life seems to be headed in the right direction. She wants to marry Patrick Wheeler. The only thing standing in the way of those plans is Patrick’s refusal to accept Christ in his life, but they’re working on that. At least they were until Louis Cantrell walked back into her life. Patrick Wheeler loves Samantha—and her little girl—but he’s done with Christ. Driven by love and desperation, Patrick proposes marriage and Samantha refuses. How can she choose a con man over him? Louis is welcome to her...

KATE
Twice widowed, Kate Archer believes she’s better off alone. Instead of romance she pours herself into a project close to her heart: establishing a foundation to meet the needs of military widows—just like the grief-stricken woman she was twenty years ago when her husband was killed by friendly fire. Nicolas Black has spent the past twenty years of his life—his entire Air Force career—trying to atone for the mistake that cost his best friend his life. When he learns of Kate’s new business endeavor, he wants to help. But being near the vibrant widow pushes all his buttons and makes him long for the things he’s never allowed himself to have...

KARLA
Karla Black had everything until the night tragedy tore her world apart. Twelve months later she is a shadow of the woman she used to be. Ian McAlister was a helpless bystander as breast cancer took his beloved wife from him one breath at a time. As days of grief turn into months, Ian begins to dwell on the vow she elicited from him before her death. Promise me that you won’t grieve for too long. But how will he know when it’s time? Two broken hearts, two futures destroyed by death, until a chance meeting in an unexpected place kindles a friendship between Karla and Ian that rockets into a romance neither one anticipated.