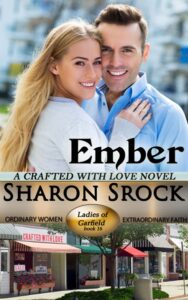 Your destination is on the left.

Ember Monroe slowed the car to a crawl and peered at the passing house numbers. She was weary from the ten-hour trip that had claimed to be eight when she’d pulled out of her drive in Garfield, Oklahoma, early that morning.

Yeah, eight hours if you have a 500-mile-plus gas tank, stomach, and bladder.

“There it is.” Ember stopped at the curb, and the anticipation that had been building for the last few hours took a sharp nosedive into apprehension. She wanted to see her old friend, but she wasn’t ready for what lay on the other side of that door. Her heart was heavy as she gathered her bag and phone. Her legs trembled as she climbed out of the car.

Before she’d made it halfway up the walkway, the front door swung open. She stumbled to a stop, her feet frozen to the cement as she stared at the specter framed in the doorway. Ember remembered Amanda as a beautiful young woman with curves in all the right places, her flawless face framed by silky blond curls. The person waiting for her on the porch was a wraith, skinny as a rail, her head wrapped in a scarf, her eyes sunken and surrounded by smudges of gray.

Separated by twenty feet of concrete and more than eight years of silence, the women studied each other. Who made the first move wasn’t important. What mattered was that, before either woman could speak a single word, they were locked in an embrace that melted time and forgave transgressions.

Amanda’s skinny arms were fierce around Ember. “You came. I was so afraid you wouldn’t. Wouldn’t have blamed you if you hadn’t. I’m so sorry.”

Ember’s arms were a bit more hesitant as she hugged Amanda’s wasted frame. “Shh…none of that. Of course I came. How could I not?”

Tears coated Amanda’s answer. “You have every reason to hate me, and I’ve got plenty of nerve reaching out to you now.” She took a step away and coughed into her fist. “Nerve but no time.” Her voice broke, and she bit her lip before looking away. “And no real choices.”

Ember swallowed back her own tears. Her best friend in all the world was dying and wanted to talk to her. That conversation wouldn’t work if they both dissolved into tears on the sidewalk. She put an arm around Amanda’s shoulders and steered her back into the house. Inside toys littered the floor, and a bowl of half eaten chicken noodle soup sat abandoned on the coffee table next to the couch. The slightly unpleasant odor of prolonged sickness lingered in the air.

“I’m sorry the house is such a mess,” Amanda said in an out-of-breath whisper. “I was going to pick up a bit, but I fell asleep.” She reached for a crumpled throw on the sofa. “Let me get this out of the way so we can sit.”

“The house is fine.” Ember took the blanket from her friend’s hands She held it up. “Do you need it?”

“Not right now. I’m cold a lot, but seeing your smile has me warmed up for now.”

Ember folded the fleecy throw and laid it aside before taking a seat on the sofa next to her friend.

Amanda leaned her head against Ember’s shoulder while Ember clasped Amanda’s hand, rubbing her thumb lightly across the bruises that decorated the paper-thin skin. As shocked as she was by Amanda’s unexpected call, as heartbroken as she was at Amanda’s diagnosis, as curious as she was about what Amanda needed, her questions could wait until Amanda caught her breath.

Why had it taken something so drastic as a terminal cancer diagnosis to bring them back into each other’s lives? The hurt of eight years before seemed insignificant when stacked up next to their shared past and a limited future.

“Forgive me—” Ember said at the same time.

They both fumbled to a stop and looked at each other. Two weepy smiles took the place of words.

“No more apologies,” Ember said. “I’m glad you called me. Tell me what you need. Tell me how I can help you.”

Amanda bowed her head. “You were always the sensible one.” She pulled her hand free and stood. “I want to show you something.” Her shuffling steps carried her across the room to the fireplace. She lifted a picture from the mantle, returned to the sofa, and offered the portrait to Ember.

Ember took the frame and gazed down into the smiling faces of two little girls. The older looked a lot like Amanda with shining blond curls and blue eyes. The younger had dark hair and brown eyes…like her father. The breath caught in Ember’s throat as the old resentment bubbled in her heart. She shoved it down ruthlessly and pasted a smile on her face before she looked up at her old friend.

“Your daughters are beautiful.”

Amanda leaned in to gaze at the picture and laid a finger against the glass over the oldest girl. “That’s Kira.” Her finger slid to the toddler. “That’s Kasey. They’re my heart and my joy. Kira is seven now, Kasey almost four.” She sat back against the cushions. “They’re spending the day with a church friend who helps me out. I’d love for you to meet them while you’re here.”

A sigh trickled from Amanda’s lips, drawing Ember’s attention from the photo. She looked at her friend, taken back to see fresh tears rolling down her face.

Amanda held up a hand and brushed the sleeve of her robe across her face. She looked around the room before facing Ember. “This was my mom’s house.”

“I’d guessed that. Mom and Dad told me that she sold the house next door to them a few years ago,” Ember said.

Amanda sat on the coffee table in front of Ember. Her face was lined with despair. “My mom died three years ago.”

“No reason why you should, but it’s important for you to know that I’m out of options.” She sniffed and continued, “Quinn has more than seven years left on his sentence. His parents relocated to England to take care of her father right after Kira was born. He passed last year but not before Quinn’s dad suffered a stroke. Quinn’s mom has her hands more than full.”

Ember frowned as her old friend delivered details of family history. Why was she sharing these details? A sudden paralyzing thought took shape in her mind. Ember studied her friend’s face, unprepared for, but certain of, the next words.

“My doctor says I have six months if I’m lucky. Six months left with my babies.” Her voice cracked on the last word, and she wrapped her arms around herself as if to keep her body in one piece against the racking sobs that shook her. “I don’t have anyone left, and I don’t have time to ease into the conversation.” She stared at Ember, pleading and desperation in her eyes. “You’re the best friend I ever had in my whole life. I need you to be a mommy to my babies after I’m gone.”

Want to read the complete story? Click the link to find the book at your favorite E-book store:https://books2read.com/u/3GAR8K

This website uses cookies to improve your experience while you navigate through the website. Out of these, the cookies that are categorized as necessary are stored on your browser as they are essential for the working of basic functionalities of the website. We also use third-party cookies that help us analyze and understand how you use this website. These cookies will be stored in your browser only with your consent. You also have the option to opt-out of these cookies. But opting out of some of these cookies may affect your browsing experience.
Necessary Always Enabled

Any cookies that may not be particularly necessary for the website to function and is used specifically to collect user personal data via analytics, ads, other embedded contents are termed as non-necessary cookies. It is mandatory to procure user consent prior to running these cookies on your website.